Foreign-born populations are a growing presence in many rural areas 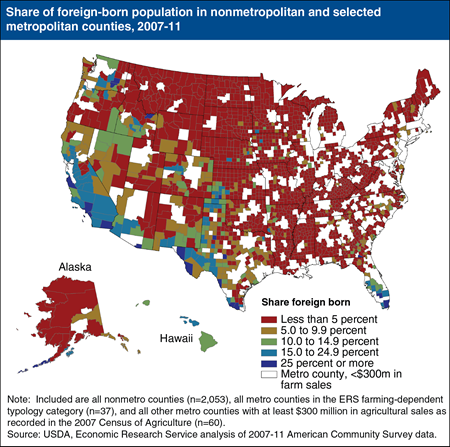 The foreign-born population of the United States has increased rapidly since 1970, primarily due to immigration from Latin America and Asia. By 2010, about 40 million people of foreign birth lived in the United States, accounting for 13 percent of the population. New immigrants have historically settled in urban areas, and that continues to be true today. Nonetheless, during 2007-11, an average of 2.1 million foreign-born people lived either in nonmetro counties or in metro counties with economies that are heavily dependent on agriculture. Although the foreign-born population in such counties accounted for a smaller percentage of the total population (4.1 percent) than in the Nation as a whole, some of these counties have large foreign-born populations. Not surprisingly, many counties along the U.S.-Mexico border and in southern Florida have above-average concentrations of foreign born, but so do places like Clark County, Idaho (31 percent); Seward County, Kansas (31 percent); Echols County, Georgia (26 percent); and Franklin County, Washington (26 percent). This map is found in Immigration and the Rural Workforce, on the ERS website, updated February 2013.