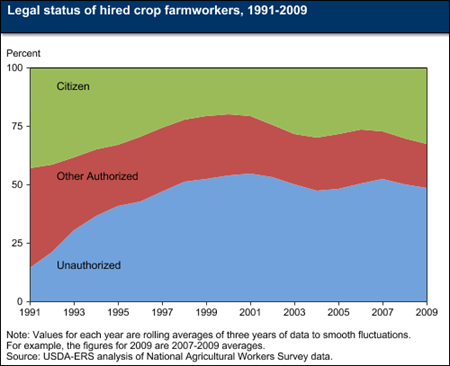 Hired farmworkers make up less than 1 percent of all U.S. wage and salary workers, but they play an essential role in U.S. agriculture, particularly in labor intensive crops such as fruits, vegetables, and nursery products. The U.S. Department of Labor's National Agricultural Workers Survey (NAWS) is the only national survey that ascertains the legal status of noncitizen farmworkers, but it is limited to hired crop farmworkers and excludes hired livestock farmworkers. Based on NAWS data, the share of hired crop farmworkers who were not legally authorized to work in the U.S. grew from roughly 15 percent in 1989-91 to almost 55 percent in 1999-2001. Since then it has fluctuated around 50 percent: the figure was 48 percent on average for 2007-2009 (the latest data available). This chart is found in the Farm Labor topic on the ERS website, updated February 2013.