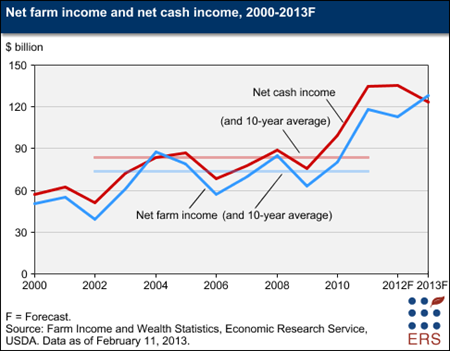 After adjusting for inflation, 2013’s net farm income, forecast at $128.2 billion, is expected to be the highest since 1973. A return to trend yields would lead to record crop production levels and result in substantial year-end crop inventories and higher net farm income. Net cash income—which measures the difference between cash expenses and the combination of commodities sold during the calendar year plus other sources of farm income—is forecast at $123.5 billion for 2013, down almost 9 percent from 2012. Not all crops produced in 2013 will be sold during the year, so while their value increases net farm income, crop cash receipts are expected to decline in 2013. A small projected increase in livestock receipts is not sufficient to offset expected increases in production expenses. Even so, 2013’s forecast would be the fourth time net cash income, measured in inflation-adjusted dollars, has exceeded $100 billion since 1973. This chart is found in the 2013 Farm Sector Income Forecast on the ERS website, updated February 11, 2013.