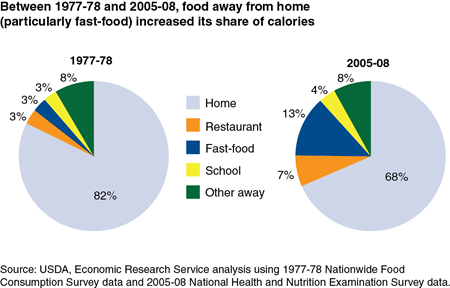 Intake data from the 2005-08 National Health and Nutrition Examination Survey (NHANES) reveal that Americans age 2 and older consumed an average of 2,002 calories per day, with 68 percent of those calories coming from at-home foods obtained at supermarkets, convenience stores, and other retail outlets. Thirty years ago, at-home foods accounted for 82 percent of U.S. caloric intake. Between 1977 and 2008, the share of calories from foods purchased at restaurants with wait staff doubled from 3.3 to 6.7 percent and fast-food places’ share grew from 3.1 to 13.2 percent. School’s share of total caloric intake rose from 3.0 to 3.7 percent. This chart appears in the ERS report, Nutritional Quality of Food Prepared at Home and Away From Home, 1977-2008, EIB-105, December 2012. See also the blog post in USDA’s Science Tuesday series.