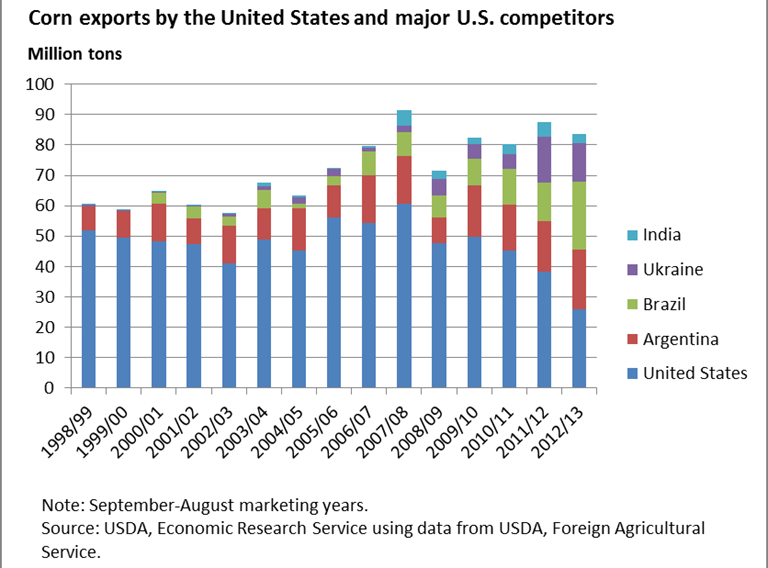 Although the United States remains the world’s largest corn exporter, exports by major U.S. competitors have gained increasing shares of the world market since the mid-2000s. The decline in U.S. corn market share has corresponded with the increased use of corn to produce ethanol in the United States, while sustained, relatively strong corn prices have sparked more production in competitor countries. In 2012/13, U.S. exports are forecast to slip to 26.0 million tons, the lowest since 1971/72, because of drought damage to the U.S. corn harvest. In 2012/13, production prospects have improved in Brazil and Argentina, the largest U.S. competitors. Brazil has been exporting corn at a record pace because tight soybean supplies have allowed a shift of port capacity to corn. Argentina’s corn exports are expected to increase following the March 2013 corn harvest, and are now forecast at a record 19.5 million tons. Ukraine’s corn export prospects remain strong for 2012/13, following the sharp increase in exports in 2011/12. India’s exports, fueled largely by increased adoption of hybrid corn, are also forecast to remain strong in the current price environment. This chart is adapted from the Feed Grain Chart Gallery published with Feed Outlook: January 2013, FDS-13a.