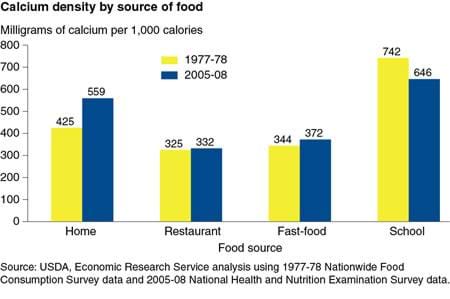 A recent analysis by ERS of national food consumption surveys found that Americans' average calcium intake rose from 743 milligrams (mg) a day in 1977-78 to 919 mg in 2005-08. The calcium density of at-home foods bought in supermarkets, convenience stores, and other retail outlets rose from 425 mg per 1,000 calories in 1977-78 to 559 mg in 2005-08. The calcium density of foods purchased at restaurants, fast food places, and other away-from-home sources remained relatively constant at 452-460 mg per 1,000 calories. Calcium densities between the two periods were the same or higher for foods from restaurants and fast-food places. The calcium density of foods obtained at school dropped between 1977-78 and 2005-08, probably due to increased availability of non-USDA foods and beverages for sale in schools. This chart appears in the ERS report, Nutritional Quality of Food Prepared at Home and Away From Home, 1977-2008, EIB-105, December 2012.