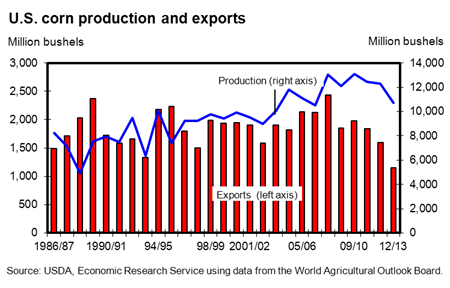 The United States is the world’s largest corn exporter, but U.S. corn exports have generally been declining since 2007. Lower U.S. corn production in the last few years and greater use of U.S. corn for ethanol production have contributed to the smaller exportable surpluses, while higher world prices have encouraged foreign exporters to grow more corn for export. For marketing year 2012/13, the drought-reduced corn harvest is expected to further reduce U.S. corn exports to 1.2 billion bushels, the lowest since 1974/75. Domestic feed and residual use of corn is also expected to fall in 2012/13 as livestock and poultry producers respond to higher feed prices by feeding fewer animals for shorter periods. U.S. corn use for ethanol is expected to decline about 10 percent to 4.5 billion bushels as supplies tighten, prices rise, and U.S. motor fuel use declines. In spite of the decline, the share of U.S. corn used to produce ethanol is expected to remain steady at about 40 percent. This chart appears in ERS’s December 2012 Feed Outlook report.