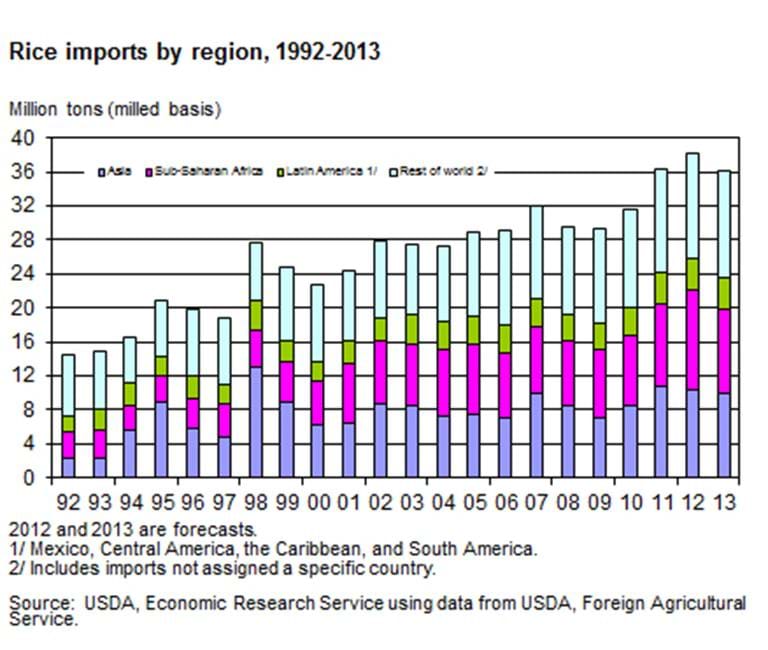 Global rice trade has expanded strongly since 2009 and is estimated at a record 38.2 million tons in 2012, up 6 percent from 2011 and 30 percent from 2009. On the 2012 demand side, growth in rice trade has been broad-based, with higher imports by China and the Philippines, Sub-Saharan Africa (Cote d'Ivoire, Nigeria, Senegal) and South America (Brazil, Colombia). On the 2012 supply side, increased exports by India and Vietnam have more than offset a major drop in shipments from Thailand, typically the largest exporter. India's exports surged to a record 10.0 million tons and Vietnam's exports rose to a record 7.2 million tons in 2012. Higher support prices and a record 2011/12 crop contributed to large government stocks in India that have been sold in the global market at competitive prices, a factor behind the record buying. For 2013, global trade is forecast to slip back to 36.1 million tons as India's stocks decline to a more normal level and the major 2012 importers rely more on accumulated supplies of rice. This chart appears in ERS's November 2012 Rice Outlook report.