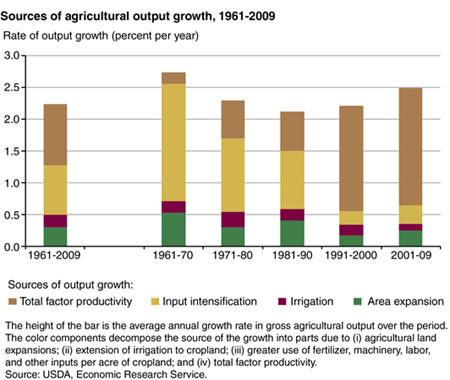 Agricultural output arises from either bringing more resources into production or by raising the productivity of those resources. Productivity of the sum of land, labor, capital and material resources is known as "total factor productivity" or TFP. Between 1961 and 2009, about 60 percent of the tripling in global agricultural output was due to increases in input use, implying that improvements in TFP accounted for the other 40 percent. TFP's share of output growth, however, grew over time, and by the most recent decade (2001-09), TFP accounted for three-fourths of the growth in global agricultural production. The rate of expansion in use of natural resources (land and water) has slowed slightly over time while the rate of growth in input intensification has fallen sharply. As such, the source of increase in agricultural yield has shifted markedly from input intensification to improvement in TFP. This chart appears in "New Evidence Points to Robust But Uneven Productivity Growth in Global Agriculture" in the September 2012 issue of ERS's Amber Waves magazine.