Farm sector profitability set to decline in 2012, but remains high by historical standards 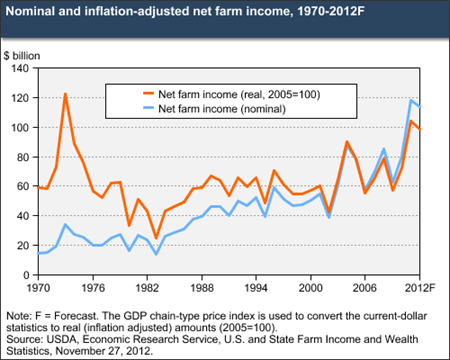 Net farm income is forecast to be $114 billion in 2012, down 3.3 percent from 2011. Despite gains in almost all sources of farm cash receipts, large increases in production expenses, especially for purchased feed, have more than wiped out the price-led gains in income. Nevertheless, after adjusting for inflation, net farm income in 2012 is expected to be the third highest in recent record, trailing only 2011 and 1973. The projected gains in 2012 livestock and crop cash receipts come mostly from expectations of price increases rather than expanding production. Oil crops and feed crops are the two leading commodities in terms of the farm sector's value of production. Total production expenses are forecast to rise 7.6 percent in 2012, led by an 18-percent increase in feed expenses. This chart is based on data from U.S. and State Farm Income and Wealth Statistics, available on the ERS website, updated November 27, 2012.