Real agricultural prices have fallen since 1900, even as world population growth accelerated 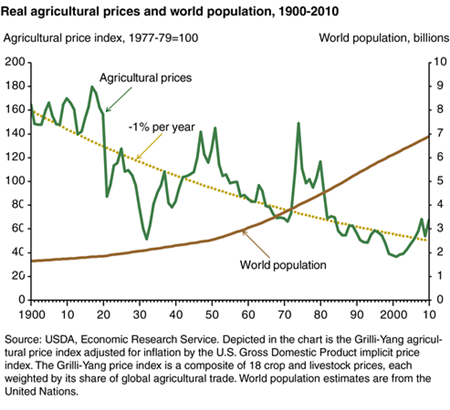 Improving agricultural productivity has been the world's primary safeguard against the needs of a growing population outstripping the ability of man and resources to supply food. Over the past 50 years, global gross agricultural output has more than tripled in volume, and productivity growth in agriculture has enabled food to become more abundant and cheaper. In inflation-adjusted dollars, agricultural prices fell by an average of 1 percent per year between 1900 and 2010, despite an increase in the world's population from 1.7 billion to nearly 7.0 billion over the same period. Nonetheless, food prices have been rising since around 2001. This has renewed concerns about the pace of agricultural productivity growth. If productivity growth slows, then more resources--land, labor, energy, fertilizers, and other inputs--would be needed to meet rising demand, raising the cost of food. This chart appears in "New Evidence Points to Robust But Uneven Productivity Growth in Global Agriculture" in the September 2012 issue of ERS's Amber Waves magazine.