U.S. per capita availability of chicken higher than that of beef in 2010 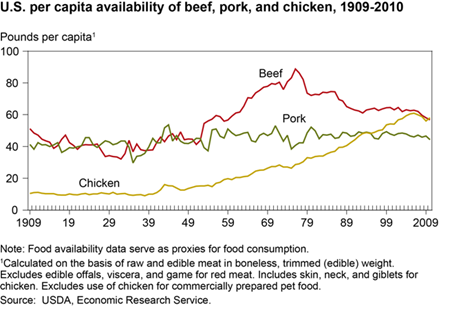 According to ERS's 2010 food availability data, the per capita supply of chicken in the United States exceeded that of beef for the first time. In 2010, 58 pounds of chicken per person on a boneless, edible basis were available for Americans to eat, compared to 56.7 pounds of beef. Chicken began its upward climb in the 1940s, overtaking pork in 1996 as the second most consumed meat. Since 1970, U.S. chicken availability per person has more than doubled. Chicken's lower price relative to beef and pork, the wide variety of convenient chicken products marketed, and health concerns related to fat, saturated fat, and cholesterol have all played a role in chicken's growing popularity. This chart appears in "U.S. Per Capita Availability of Chicken Surpasses That of Beef" in the September 2012 issue of ERS's Amber Waves magazine.