Pesticide use has held steady while some types fluctuate slightly 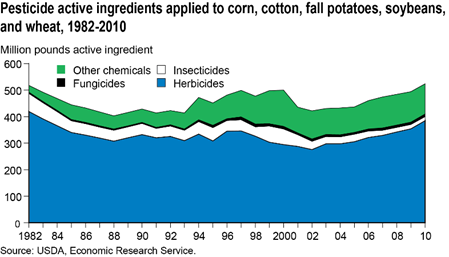 Total pesticide use on corn, cotton, fall potatoes, soybeans, and wheat was stable during 1982-2010, increasing in some years and declining in others, with an average annual increase of 0.2 percent. Herbicide and insecticide quantities applied declined 0.2 percent and 3.9 percent per year, while fungicide and other-chemical quantities increased 3.3 and 6.0 percent. Changes in the use of pesticides during this period are due to several factors, including the widespread adoption of genetically engineered crops, the expiration of the glyphosate patent in 2000, the availability of new compounds with lower application rates, boll-weevil eradication, and changes in pesticide prices, which increased slowly compared to the prices of other inputs such as fertilizer. This chart can be found in the ERS report, Agricultural Resources and Environmental Indicators, 2012 Edition, EIB-98, August 2012.