Exports of U.S. fresh blueberries have grown in recent years 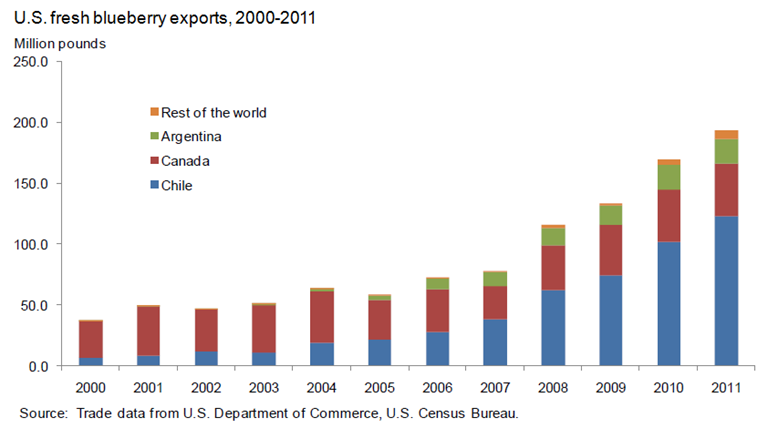 More than half of U.S. blueberries cater to the domestic market, but U.S. fresh blueberry exports have been increasing in the last decade. With fairly steady increases over the past 10 years, the U.S. blueberry industry achieved a record-breaking fresh-market export volume in 2011 of 78.5 million pounds, valued at $376 million. Export volume in 2011 relative to the previous year increased 21 percent to Chile but declined 2 percent to Canada. Chile has replaced Canada as the top export destination for U.S. fresh blueberries since 2007, averaging around 60 percent of total export volume in the past three years. Though still relatively small in comparison to Chile and Canada, Argentina has emerged as an important market for U.S. blueberries, with its share of total export volume climbing from a 2-percent average during the early 2000s to around 12 percent in recent years. This chart comes from the Fruit and Tree Nut Outlook, FTS-352, June 2012.