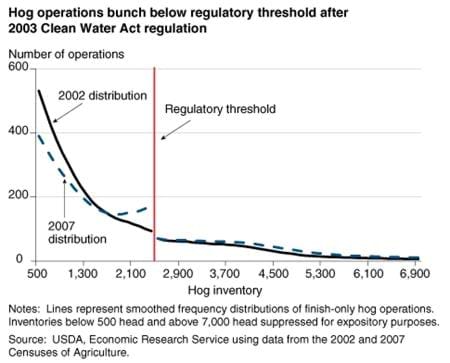 In 2003, the U.S. Environmental Protection Agency strengthened Federal Clean Water Act (CWA) regulations governing the handling and application of manure by livestock operations. An important and unchanging feature of these CWA regulations is that operations confining more than a specific number of livestock face more stringent rules. Using U.S. Census of Agriculture data from 2002 and 2007, changes in the size distribution of hog farm operations in years before and after the stricter 2003 regulations can be identified. The distribution varies smoothly across the regulatory threshold of 2,500 hogs prior to the 2003 CWA rules, but shows a sharp discontinuity at the 2,500 head threshold by 2007. The unexpectedly large number of farms located just below the regulatory threshold in 2007 suggests that some livestock facility operators may be controlling the size of their hog inventories to avoid the costs of regulation. This chart is found in the June 2012 issue of Amber Waves magazine.