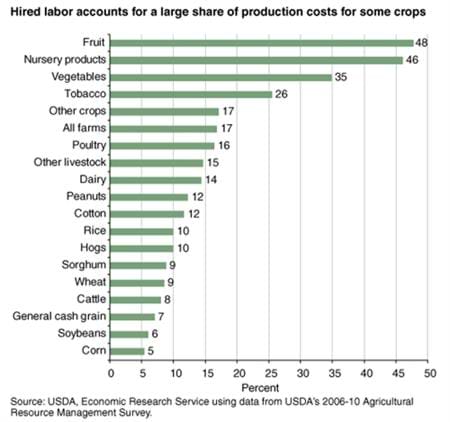 Over the past 15 years, roughly half of the hired laborers employed in U.S. crop agriculture have lacked the immigration status needed to work legally in the United States. Large shifts in the supply of foreign-born farm labor, such as those that might result from substantial changes to U.S. immigration laws or policies, could have significant effects on production costs in U.S. agriculture. Hired labor (including contract labor) accounted for about 17 percent of the sector's variable production expenses and even higher proportions in more labor-intensive sectors, such as vegetables (35 percent), nursery products (46 percent), and fruits (48 percent), according to 2006-10 Agricultural Resource Management Survey (ARMS) data. This chart is found in The Potential Impact of Changes in Immigration Policy on U.S. Agriculture and the Market for Hired Farm Labor: A Simulation Analysis, ERR-135, May 2012.