The share of population that are veterans varies across the U.S. 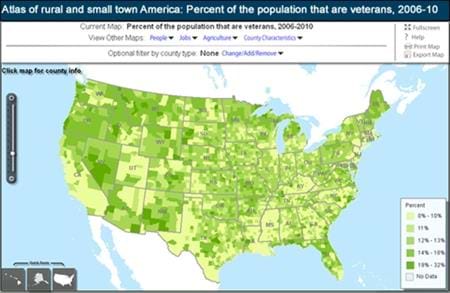 On average, between 2006 and 2010 approximately one in eight or 11.7 percent of the civilian population age 18 or older residing in a nonmetro county were Veterans, which is similar to the national county average (11.5 percent). The largest shares of the Veteran population relative to the nonmetro civilian adult population were found in counties in the West and the Midwest, particularly within retirement destination counties-counties where the number of residents 60 and older grew by 15 percent or more between 1990 and 2000 due to in-migration. This is not surprising given that the median age of rural Veterans is currently 63, which reflects the continuing trend of the aging Veteran population in rural America and in the nation as a whole. This map is from the Atlas of Rural and Small-Town America on the ERS website, updated May 4, 2012.