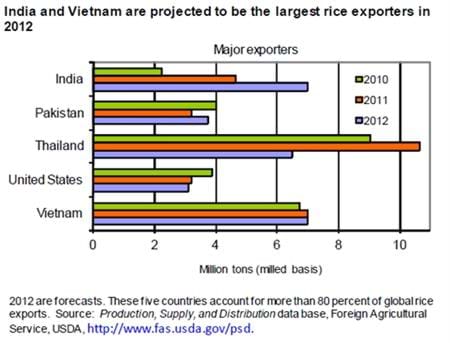 Global rice trade in 2012 is expected to be the second highest on record, with the calendar year 2012 trade forecast of 34 million tons 6 percent below the 2011 record of 36 million tons. The decline in global trade this year is largely due to weaker demand for imports from several top buyers, particularly Bangladesh, Indonesia, and Nigeria. India and Vietnam will be the largest rice exporting countries in 2012, making 2012 the first year since 1981-when the United States was the largest exporter-that Thailand has not been the largest rice exporting country. This chart is found in the April 2012 Rice Outlook, RCS-12d.