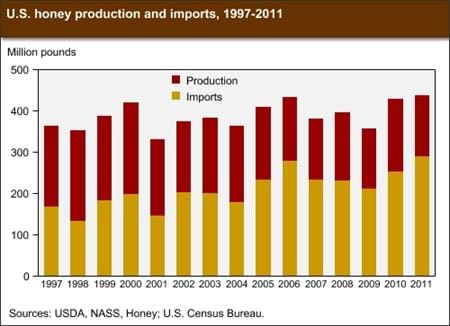 The U.S. honey crop was hampered by drought conditions in the South and heavy rainfall in many northern States in 2011. As a result, domestic honey production dropped 16 percent in 2011 from 2010 as the number of bee colonies fell 7.5 percent and yield per colony declined 9 percent. In total, domestic production fell by 28.1 million pounds of honey, despite record-high average prices received by honey producers in both 2010 and 2011. The drop in U.S. production, coupled with high domestic honey prices, increased honey imports to 288.3 million pounds in 2011, twice the amount imported a decade ago in 2001. The top three foreign suppliers of natural honey to the United States -- Argentina, Vietnam and India -- accounted for two-thirds of total U.S. imported honey in 2011. This chart is found in the April 2012 Sugar and Sweeteners Outlook, SSS-M-284.