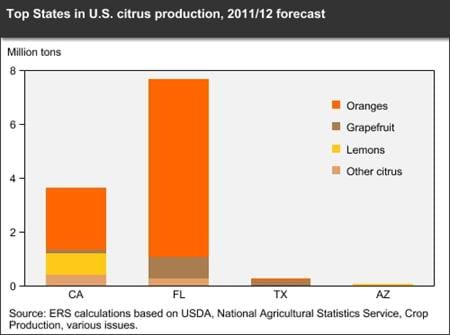 Although orange production is forecast higher in 2011/12, decreases in all other citrus categories are expected to bring total production down, to 11.6 million tons from the previous season's 11.7 million tons. At 2.3 million tons, California's orange production is forecast down from the 2010/11 season due to an 8-percent smaller navel crop. Florida's 2011/12 orange crop is forecast at 6.6 million tons, up 5 percent from last season. California's lemon harvest is forecast down 7 percent and a freeze in Arizona that caused significant damage to the lemon crop is expected to result in a 72-percent decline in lemon production there. Imported lemons, mostly from Mexico, are helping shore up lower domestic production. This chart is based on data from Table 3 in the March 2012 Fruit and Tree Nuts Outlook, FTS-351.