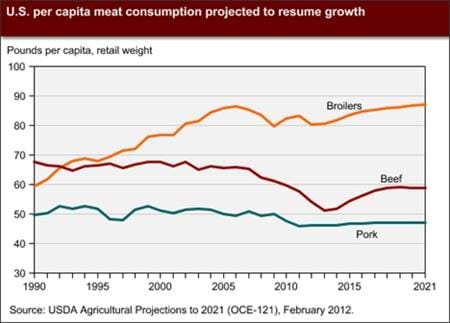 Over the past several years, high feed prices, the economic recession, and drought in the Southern Plains of the United States have combined to reduce producer returns and lower production incentives in the livestock sector. The resulting declines in meat production along with strong meat exports have raised consumer meat prices and lowered per capita consumption in the United States. Annual average consumption of red meats and poultry has fallen from over 221 pounds per capita in 2004-07 to a projection of less than 200 pounds in 2012-14. With feed costs projected to decline from recent highs, improved net returns in the livestock sector provide economic incentives for expansion of meat and poultry production over the rest of the decade. As production increases, per capita consumption of red meats and poultry is expected to rise to about 213 pounds by 2021. This chart comes from the ERS report, USDA Agricultural Projections to 2021, OCE-121, February 2012.