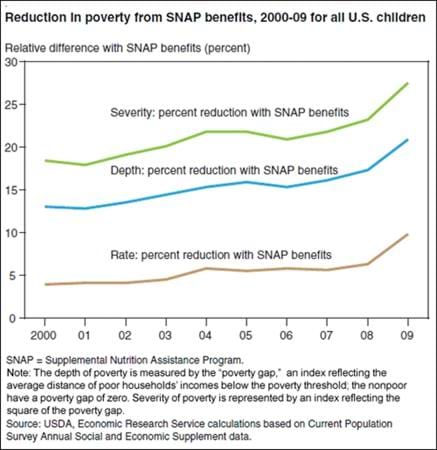 A recent ERS analysis found that USDA's Supplemental Nutrition Assistance Program (SNAP) has a relatively stronger effect on the depth and severity of poverty than on the poverty rate, or prevalence of poverty. SNAP benefits have a particularly strong alleviative effect on poverty among children, who experience significantly higher rates of poverty than the overall population. The official poverty rate for children in 2009 was 20.7 percent, compared to 14.3 percent overall. Official poverty rates, as calculated by the U.S. Census Bureau, do not include non-cash assistance, such as SNAP benefits, as income. When SNAP benefits are added to family income, the 2009 child poverty rate is lowered to 18.7 percent, and the depth of child poverty declines by an average of 15.5 percent over 2000-09 and severity by 21.3 percent. SNAP's antipoverty effect peaked in 2009, when benefit increases were authorized by the American Recovery and Reinvestment Act. This chart appears in Alleviating Poverty in the United States: The Critical Role of SNAP Benefits, ERR-132, released April 9, 2012.