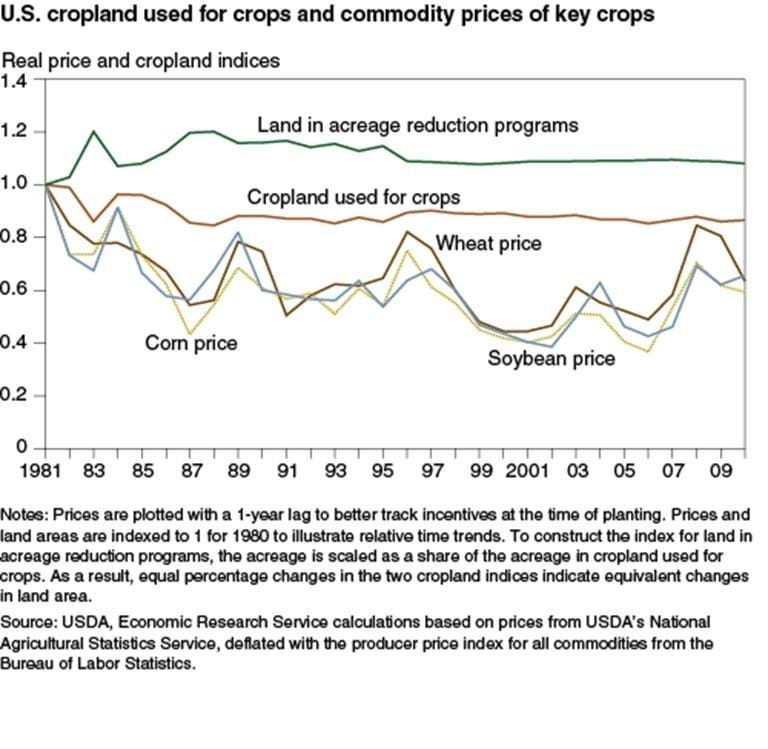 Since 1980, the variation in cropland used for crops has been relatively small, despite significant variation in real (adjusted for inflation) commodity prices. Between 1980 and 2002, the real prices of major commodities (e.g., corn, soybeans, wheat) declined by over 60 percent, while total cropland used for crops dropped by about 6 percent. This relatively small reduction in cropland use may reflect changes in farm legislation in the 1980s and 1990s, which marked a shift toward greater market orientation with the addition of income-supporting (rather than price-supporting) commodity loan programs in 1985 that help protect against revenue losses and the introduction of planting flexibility on acres qualifying for commodity program payments in 1990. Productivity increases also mitigated some of the effect of real price declines on the real returns to crop production. Since 2002, prices of major commodities dropped and then spiked during 2006-08. While cropland used for crops changed little in total during this period, farmers changed the mix of crops by increasing land in corn and wheat and reducing the amount of land planted to hay and other crops. This chart is found in the March 2012 issue of Amber Waves magazine.