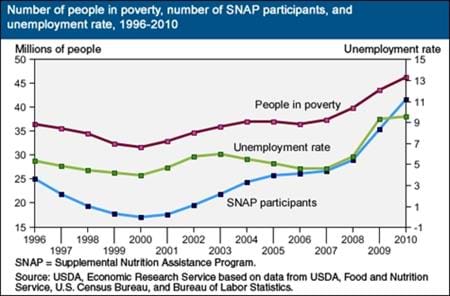 In October 2011, 46.2 million Americans participated in USDA's Supplemental Nutrition Assistance Program (SNAP), up from 17.3 million people 10 years earlier. For most of the program's history, SNAP participation has tracked with the unemployment rate, rising as unemployment worsened and falling as employment picked up. During the 2001 and 2007-09 recessions, changes in the SNAP caseload were consistent with this pattern. However, this historical relationship diverged in the middle of the last decade. As the unemployment rate fell 1.4 percentage points between 2003 and 2007, SNAP caseloads increased 21.9 percent, or by 4.8 million participants. The number of people in poverty rose by 3.9 percent, indicating that economic need remained high even as unemployment declined. In 2010, the unemployment rate increased modestly, while the number of people in poverty grew by 6.0 percent and SNAP caseloads expanded by 17.8 percent. This chart is from "What's Behind the Rise in SNAP Participation?" in the March 2012 issue of ERS's Amber Waves magazine.