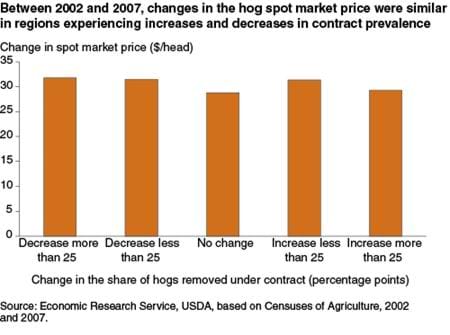 ERS researchers used farm-level data from the 2002 and 2007 Censuses of Agriculture to examine the effect of increasing use of hog production contracts on market prices, often referred to as "spot market" prices. Comparing the prices received by independent producers in regions of growing contract production with the prices in regions of shrinking contract production, researchers found no strong relationship between contract prevalence and spot market prices. Between 2002 and 2007, the average price received by all independent producers who specialized in growing hogs to market weight increased slightly more. In counties where the share of production under contract decreased or increased by a small amount (fewer than 25 percentage points), the average price increased by about $31.50 per head. Price increases were lower in counties where contracting prevalence either did not change or increased by more than 25 percentage points. However, the average-price differences between all the groups were relatively small. This chart is found in the March 2012 issue of Amber Waves magazine.