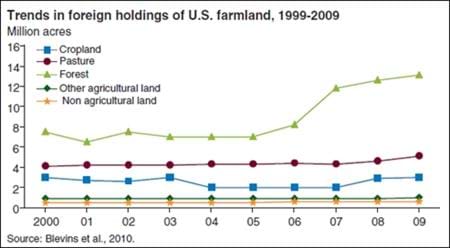 Despite recent increases in foreign ownership of forest land, annual data compiled by USDA's Farm Service Agency reveal that, as of February 2009, only 1.7 percent of privately owned land in farms or forest-22.8 million acres-was owned by foreigners. The majority of this land is owned by people or firms from two countries: Canada (34 percent) and the Netherlands (17 percent). Most foreign ownership is concentrated in Maine: 15.7 percent of Maine's privately owned farm and forest land, or 2.82 million acres, is foreign owned. Of this amount, 2.77 million acres are forest land. Hawaii, Washington, Nevada, Alabama, and Texas all have relatively high levels of foreign ownership of farm and forest land. This graph is found in the ERS report, Trends in U.S. Farmland Values and Ownership, EIB-92, February 2012.