Foodservice and food processing take biggest bite out of the U.S. food dollar 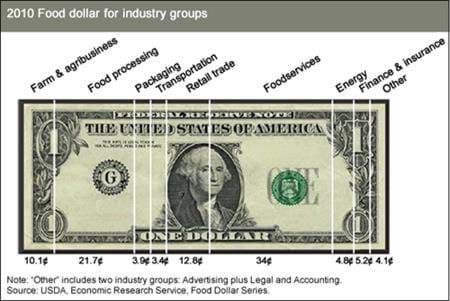 For a typical dollar spent in 2010 by U.S. consumers on domestically-produced food, including both grocery store and eating out purchases, 34 cents went to pay for services provided by foodservice establishments, 21.7 cents to food processors, and 12.8 cents to food retailers. ERS uses input-output analysis to calculate the value added, or cost contributions, to the food dollar by 10 industry groups in the food supply chain. Food processing costs per food dollar were up 17 percent since 2008, whereas costs per food dollar for most other industry groups were flat or declined. For example, energy used throughout the food system accounted for 4.8 cents of the food dollar, down from 6.8 cents in 2008. This chart is from the Food Dollar Series data product on the ERS website, updated March 20, 2012.