Net farm income forecast to decline, but remain high, in 2012 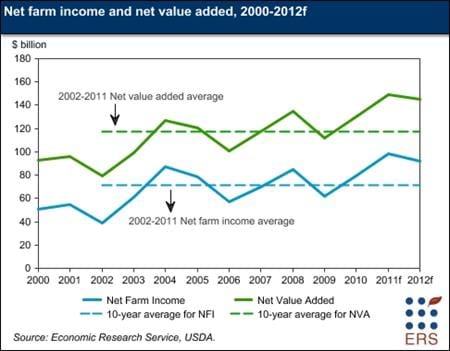 Net farm income is forecast to be $91.7 billion in 2012, down $6.3 billion (6.5 percent) from the 2011 forecast, but still the second highest nominal value on record. Net value added is expected to decrease by almost $4.2 billion in 2012 to $145.1 billion. While farm income can vary widely from year to year, the declines in each of the three farm income measures are the smallest decreases recorded since 2000. This chart appears in the Farm Sector Income & Finances topic on the ERS website, updated February 13, 2012.