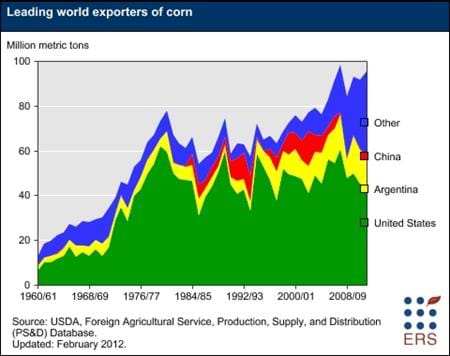 The United States is the world's largest producer and exporter of corn. China has been a significant source of uncertainty in world corn trade, swinging from being the second-largest exporter in some years to occasionally importing significant quantities. Argentina, the second-largest corn exporter in most years, is in the Southern Hemisphere. Farmers there plant their corn after the size of the U.S. crop is known, providing a quick, market-oriented supply response to short U.S. crops. Several countries-including Brazil, Ukraine, Romania, and South Africa-have had significant corn exports when crops were large or international prices attractive. This chart is found in the Corn topic on the ERS website, as updated January 17, 2012.