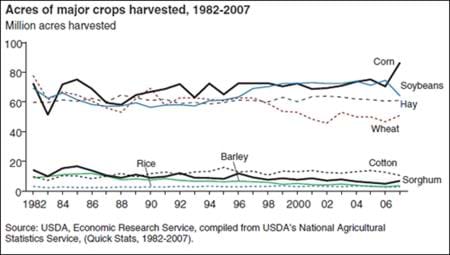 While cropland use in the United States has varied over the past three decades, the 8 most common crops-corn, soybeans, hay, wheat, cotton, sorghum, barley, and rice-have consistently accounted for the bulk of harvested acres. In 1982, farmers harvested over 316 million acres from these crops. By 1992-largely due to the increased enrollment of farmland in Federal acreage reduction programs and the CRP-only 276 million acres of these crops remained. As grain prices spiked in 1997, harvested acreage of these 8 crops rose to 298 million acres. By 2007, the expansion of minor crops caused the level of harvested acres of major crops to drop to roughly 286 million acres. More recent crop price increases are leading to a complex set of further land use changes, both among specific commodities and in the amount of land planted to major crops. This chart is found in the ERS report, The Changing Organization of U.S. Farming, EIB-88, December 2011.