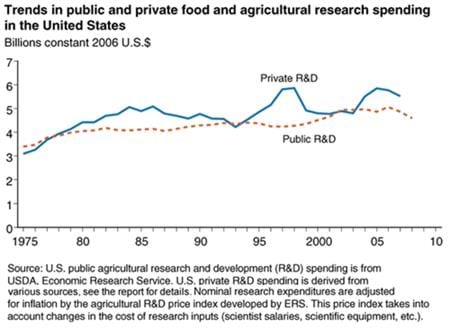 Private spending on food and agricultural R&D in the United States has exceeded public-sector agricultural research expenditures most years since the late 1970s. Federal and State governments invested on average $4.40 billion annually (constant 2006 dollars) in agricultural research between 1980 and 2007, while the private sector spent an average of $4.95 billion per year (constant 2006 dollars) over the same period. But each sector focuses its research resources differently. The private sector accounts for about 80 percent of total food-related research and about 47 percent of total research related to production agriculture. Within these areas, public research is more oriented toward basic or fundamental science and scientific training, as well as topics like food safety, genetic resource conservation, and farming practices to conserve natural resources, research that has high social value but for which private incentives are relatively weak. This chart is found in the ERS report, Research Investments and Market Structure in the Food Processing, Agricultural Input, and Biofuel Industries Worldwide, ERR-130, December 2011.