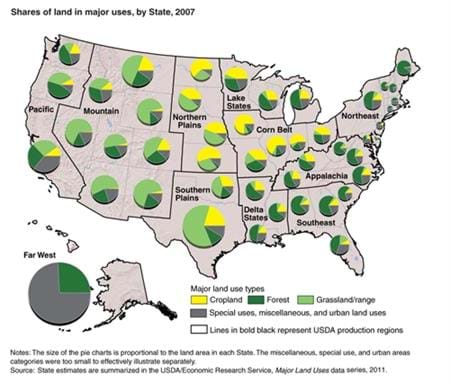 Land-use patterns vary greatly by region, reflecting differences in soils, climate, topography, and patterns of population settlement. Some clear regional land-use patterns exist. Cropland is roughly concentrated in the central regions of the contiguous United States, where the Northern Plains and Corn Belt hold the majority of their land in cropland. The Mountain region and Southern Plains have the majority of their land in grassland pasture and range. The Northern Plains and Pacific regions also have relatively high shares of grazing acreage, with more than a third and a quarter of their land area, respectively, allocated to grassland and pasture and range. Forest-use land is most prevalent in the Eastern regions, such as the Northeast, Appalachian, Southeast, and Delta States, which have a majority of their land in forest uses. The Northeast and Southeast have the highest shares of urban land, while the Lake States, Corn Belt, Appalachian, and Pacific regions also have urban shares above the nation's average. This map is found in the ERS report, Major Uses of Land in the United States, 2007, EIB-89, December 2011. The data that underpin the report are available in Major Land Uses, a data product on the ERS website, updated December 19, 2011.