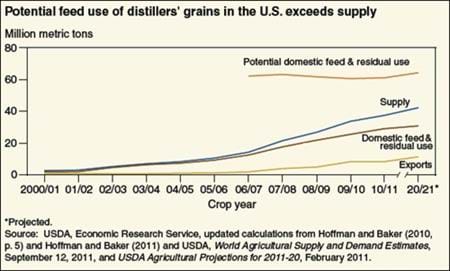 U.S. production of distillers' grains (DGs), which include a range of animal feed co-products derived from corn-based dry-mill ethanol production, has quadrupled since 2004/05, paralleling the rapid growth of U.S. ethanol production. Despite initial concerns about the capacity of domestic or foreign livestock feeders to utilize DGs, they are now the second largest category of processed feed used in the U.S. ERS researchers estimate that potential feed use of DGs could have averaged 62 mmt (million metric tons) during the past 5 years, far above estimated actual domestic DGs feed consumption of 29.1 mmt and supply of 37.4 mmt for 2010/11. The importance of DGs as a livestock feed will continue to grow, but the gap between projected potential and actual DGs feed use will remain, as growth in corn-based ethanol production is expected to slow in the next decade and DGs exports are expected to grow. This chart comes from the December 2011 issue of Amber Waves magazine.