Minority farms an increasing share of all U.S. farms 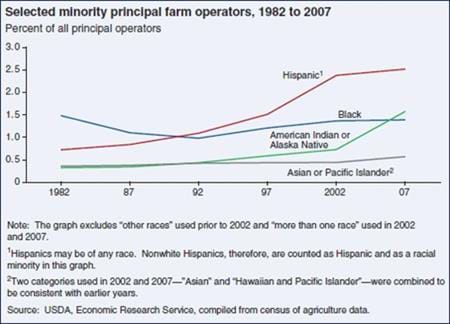 Between 1982 and 2007, the number of U.S. farms stabilized at roughly 2 million. Nonetheless, the number of farms with a minority operator-non-White or Hispanic-more than doubled to 142,300, growing from 3 percent of U.S. farms in 1982 to 6.5 percent in 2007. Among minority farms, operations run by American Indians/Alaska Natives or Hispanics grew the fastest. Not all the increase, however, came from new entrants. Some of the increase reflects changes in census methodology designed to provide better counts of small and minority-run farms. This chart is found in the ERS report, The Changing Organization of U.S. Farming, EIB-88, December 2011.