Can Brazil meet the world's growing need for ethanol? 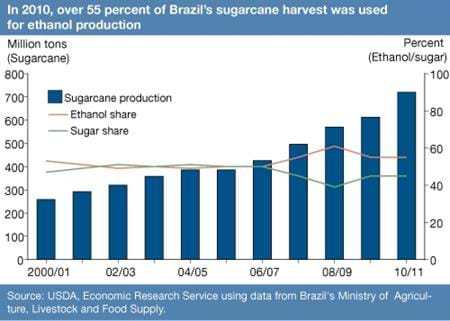 Brazil is now the world's largest grower of sugarcane at 719 million tons in 2010, accounting for a third of world production, and Brazil is the world's second largest ethanol producer and exporter (after the United States). In 2010, Brazilian sugarcane used for ethanol production totaled 398 million tons, or 55.4 percent of the sugarcane harvested. Domestic and global growth in ethanol demand has boosted the share of cane used for ethanol since 2006/07. The allocation of sugarcane to production of sugar versus ethanol is set by millers based on expected sugar and ethanol prices and market demand. This marks a significant change from the early years of Proálcool (Brazil's ethanol program), when the allocation of sugarcane to ethanol production was an administered policy instrument to counter oversupply of sugar and low international sugar prices. This chart may be found in the December 2011 issue of Amber Waves magazine.