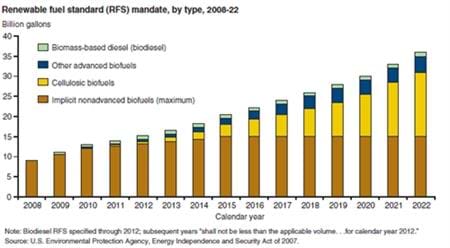 To reduce dependence on foreign oil and to address climate change concerns, U.S. policymakers introduced a combination of policies to support the production and consumption of biofuels. An important element of U.S. biofuel policy is the Renewable Fuel Standard (RFS), which originated with the Energy Policy Act of 2005 and was expanded and extended by the Energy Independence and Security Act of 2007 (EISA). Provisions of the new mandate (or RFS2) go through 2022. Under the modified RFS, the implicit mandate for corn-based ethanol (conventional biofuel) is essentially capped at 15 billion gallons by 2015, while 21 of the 36 billion gallons mandated in 2022 must be derived from advanced biofuel, such as cellulosic biofuel, non-corn-based ethanol, and biomass-based diesel. This chart is found in The Renewable Identification Number System and U.S. Biofuel Mandates, BIO-03, November 2011.