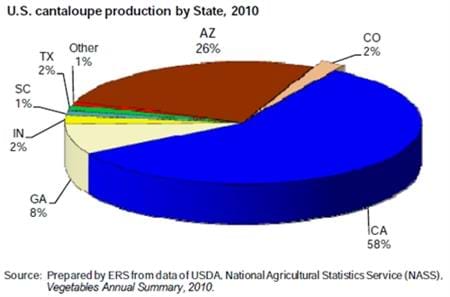 On September 14, 2011, the U.S. Food and Drug Administration (FDA) identified Jensen Farms in Colorado as the source of cantaloupe contaminated with Listeria monocytogenes. (The company immediately recalled cantaloupe shipped between July 29 and September 10, 2011.) Colorado is a minor producer of U.S. cantaloupe, with approximately 2 percent of national output in 2010. The largest producing States are California (58 percent) and Arizona (26 percent). The United States imports over one-third of the cantaloupes consumed in the country. This chart may be found in the October 27, 2011 Vegetables and Melons Outlook, VGS-347.