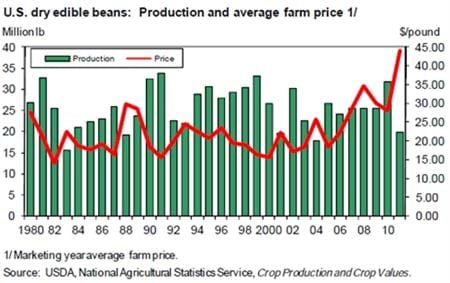 U.S. dry bean markets find themselves in relatively unfamiliar territory as prices continue to reach for the sky in reaction to a small 2011 crop, strong prices for other field crops, and moderate demand. The October 2011 U.S. dry bean production estimate was trimmed to 19.6 million hundredweight (cwt)-down 38 percent from a year earlier and the smallest crop since 2004's weather-shortened crop. Although yield is projected to be up 1 percent to 17.44 cwt, harvested area for the 2011 dry bean crop is currently expected to be 1.12 million acres-the lowest since 1921. Harvested area is expected to be lower than a year earlier for each of the 18 States included in the estimate, with industry leader, North Dakota, down 52 percent. This chart is from the October 27, 2011 Vegetables and Melons Outlook, VGS-347.