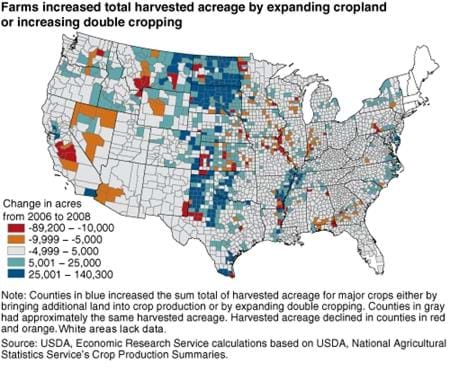 National-level data show that both corn and soybean acreage increased over the past decade. In addition to shifting acreage between crops, farms can also increase total harvested acreage by expanding cropland or by increasing double cropping-the practice of harvesting two crops from the same field in the same year. County-level data show where growth in total harvested acres occurred during the rapid runup in ethanol production. Outside of the Corn Belt, many counties increased total harvested acres between 2006 and 2008. This chart is from the September 2011 edition of Amber Waves magazine, and also appears in The Ethanol Decade: An Expansion of U.S. Corn Production, 2000-2009, EIB-79, August 2011.