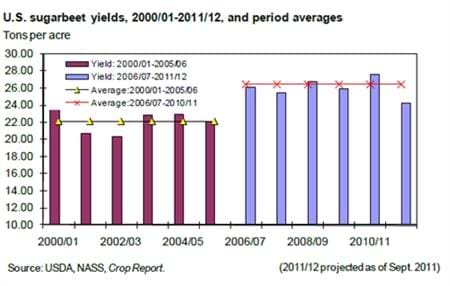 National sugarbeet yield is forecast at 24.2 tons per acre. Although this yield forecast is close to the average national yield since 2000/01 of 24.1 tons per acre, it is far below yields since 2006/07. Better seed varieties, designed to minimize disease and pest losses, were responsible for enhanced yields starting in 2006/07. Annual yields since 2006/07 have averaged 26.4 tons per acre, compared with 22.1 tons for 2000/01-2005/06. Yields in the latter period were not only larger but also about 49 percent less variable. Most of the recent sugarbeet production reduction was centered in the Red River Valley producing States of Minnesota and North Dakota. Poor growing conditions for the entire season have hampered plant development and will cause the harvest season to begin later than originally expected. A late start increases the likelihood of hard freezes before the crop is fully harvested. This chart appears in the September 15, 2011 release of Sugar and Sweeteners Outlook, SSS-M-277.