Prevalence of food insecurity varies from State to State 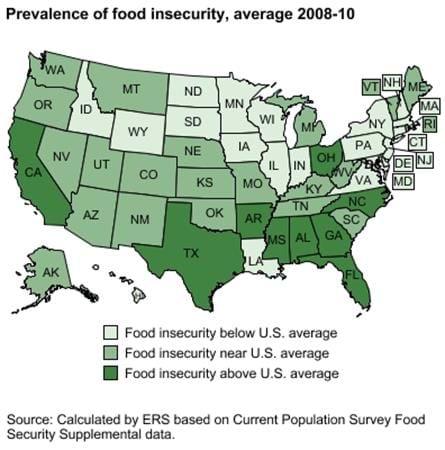 In 2010, 14.5 percent of U.S. households were food insecure-they had difficulty at some time during the year providing enough food for all their members because they had insufficient money or other resources for food. But the prevalence of food insecurity is not uniform across the country. Estimated prevalence rates of food insecurity during 2008-10 ranged from 7.1 percent in North Dakota to 19.4 percent in Mississippi. (Data for 2008-10 were combined to provide more reliable State level statistics.) This map is found in the Food Security in the United States topic on the ERS website, updated September 7, 2011. More detailed information may be found in the report, Household Food Security in the United States in 2010.