Despite a higher yield, the U.S. 2011/12 rice crop is projected to decline 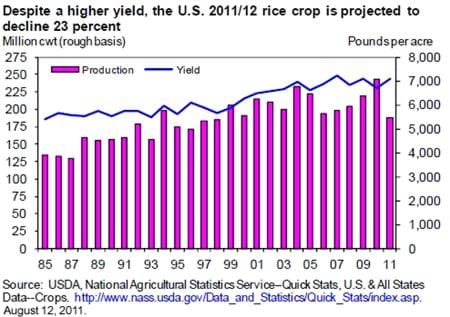 The 2011/12 U.S. rice production forecast (made August 12, 2011) was 188.1 million cwt (hundredweight, or 100 pounds), down 23 percent from the year-earlier record and the smallest crop since 1998/99. This month's revised forecast (up 1.1 million cwt) is based on higher expected yields. At 7,114 pounds per acre, the average field yield is up 55 pounds from last month's forecast, 6 percent above a year earlier and the second highest on record. This is the first survey-based forecast for the 2011 U.S. rice crop. On an annual basis, harvested area declined in all Southern States, partly due to severe flooding in the Delta this spring that prevented planting in some areas. Even prior to planting, growers in the South had indicated smaller plantings in 2011/12 due to stronger relative returns for alternative crops. This chart is found in Rice Outlook, RCS-11h, August 12, 2011.