A record soybean supply in Brazil is seen to expand exports 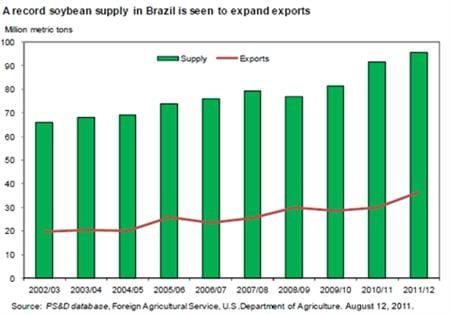 As of the August 2011 forecast, Brazil produced a record 2010/11 soybean crop of 75.5 million tons (up 1 million tons from last month's estimate based on the latest harvest results). The upward adjustment in Brazil's historical yield trend for soybeans improves the new-crop outlook-raising the 2011/12 crop projection by 1 million tons to 73.5 million. Projected soybean area for Brazil is unchanged at 25 million hectares (up 3 percent from 2010/11) as corn will compete strongly for cropland. Corn prices in Brazil are up 60-65 percent from a year ago, compared to 20-25 percent for soybeans. The rise in soybean prices is being restrained by large domestic stocks remaining from the 2010/11 harvest. This chart is found in Oil Crops Outlook, OCS-11h, August 12, 2011.