U.S. cattle numbers have declined while beef production has risen 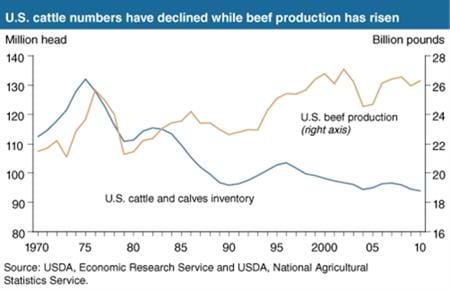 The U.S. cattle and calves inventory as of January 1, 2011 was the lowest since 1958. When evaluated on a year-over-year basis, the inventory has continued to decline through 2011, with declines fueled by drought in the Southern Plains and Southeastern United States. Beef production, however, has trended upward over the past several decades. Higher slaughter weights and efficiency gains have resulted in increasing beef production even as cattle inventories have declined. However, beef production too is expected to decline in 2012. This chart appeared in the June 2011 issue of Amber Waves magazine.