SNAP is the largest of USDA's food assistance programs 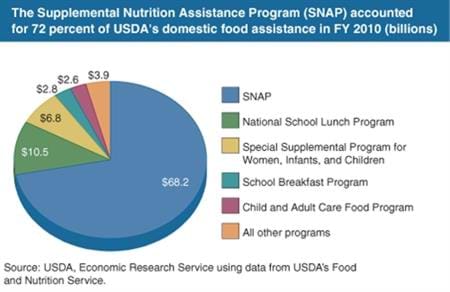 USDA's Supplemental Nutrition Assistance Program (SNAP), formerly the Food Stamp Program, is the Nation's largest domestic food and nutrition assistance program for low-income Americans. Federal spending for the program reached $68.2 billion in fiscal year 2010, up from $53.6 billion in fiscal year 2009. This 27-percent increase was due to an increase in the number of people participating in the program and higher average per person benefits. In fiscal year 2010, an average of 40.3 million people participated in SNAP each month. This chart appeared in the June 2011 issue of Amber Waves magazine.