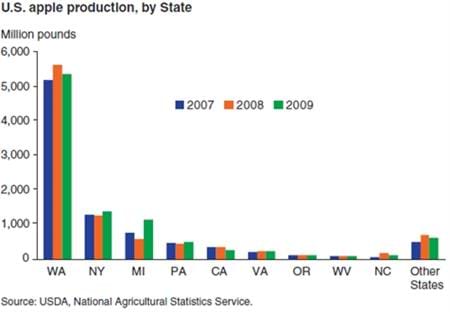 Washington State currently produces over half the Nation's domestically grown apples and has been the leading apple-growing State since the early 1920s. In 2009, Washington State produced 5.4 billion pounds of apples. New York and Michigan produced over 1 billion pounds each. Apple production has been somewhat stable in Washington State, New York, and Michigan since the 1990s, but production in many other States has declined.This graph comes from Characteristics of Conventional and Organic Apple Production in the United States, FTS-347-01, July 2011.