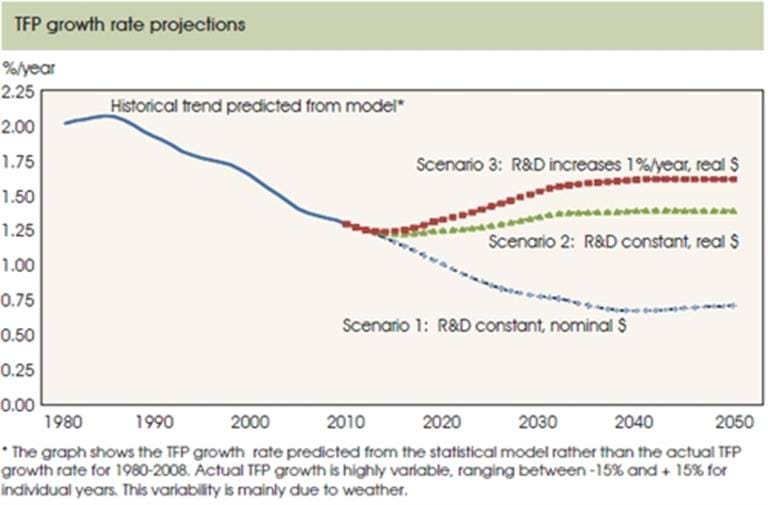 For the past 60 years or more, the main driver of growth in U.S. agricultural output has been productivity growth, in turn, depends on agricultural research and development (R&D) investments by the public and private sectors, agricultural extension and education, and improved infrastructure. Holding other factors constant, the pattern of future growth in TFP can be simulated using a model relating current and future public agricultural R&D spending trends to TFP. If productivity-oriented public R&D spending is held constant at its current annual level of $2.5 billion for the next 40 years, the loss of real R&D budget purchasing power may result in TFP growth of only about 0.75 percent per year, roughly half of its current level. This could result in U.S. agricultural output in 2050 being roughly 40 percent higher than current levels when global demand for agricultural output is expected to be 70 to 100 percent higher. Allowing public R&D investments to keep pace with inflation (scenario 2) and inflation plus U.S. population growth (scenario 3) could result in U.S. agricultural output being 73 to 83 percent higher than current levels by 2050 without requiring that more resources (land, labor, capital) be devoted to agriculture. This chart comes from Public Agriculture Research Spending and Future U.S. Agricultural Productivity Growth: Scenarios for 2010-2050, EB-17, July 2011.