Anatomy of a price spike 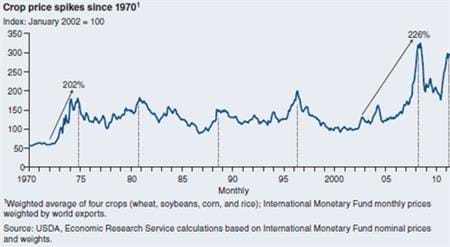 Anatomy of a price spikeFriday, July 29, 2011During the last 40 years, five periods of large increases in agricultural prices were followed by sharp declines. A sixth surge in prices began in July 2010 and has not yet turned down. In 1972-74 and 2002-08, prices rose significantly more in percentage terms than in the other time periods. Prices did not decline back to their pre-peak level, however, as they did during price spikes in the 1980s and 1990s. The upward price movement during 2002-08 was the longest and was followed by the fastest decline. Prices for 2010-11 have risen faster than the other price spikes since 1970. The four-crop index rose about 70 percent in 8 months, equivalent to a 6.9 percent average monthly growth rate. This chart was published June 2011 in the ERS report Why Have Food Commodity Prices Risen Again?, WRS-1103.