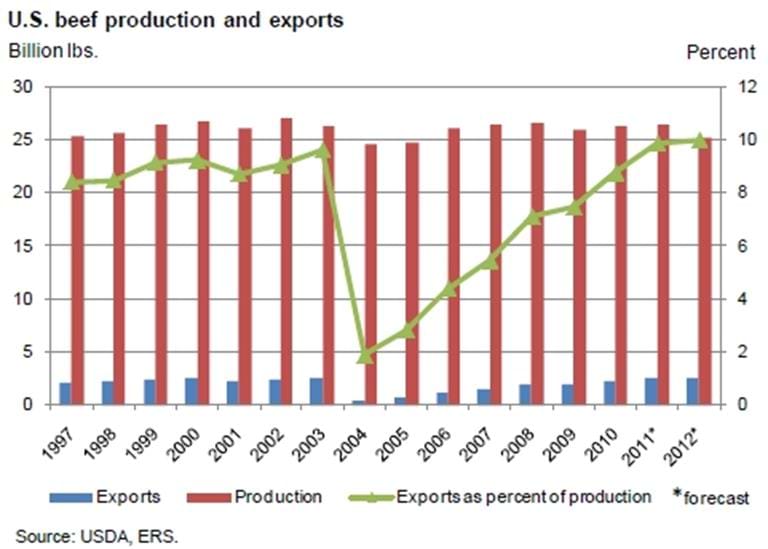 As a percent of production, U.S. beef exports are expected to surpass levels set in previous years. In 2011, U.S. domestic production is forecast at nearly 26.3 billion pounds. Even at higher year-over-year production levels in 2011, U.S. beef exports are expected to be about 9.9 percent of production this year. U.S. beef exports are forecast at 2.52 billion pounds in 2012. This graphic comes from the Livestock, Dairy, and Poultry Outlook, LDP-M-204, June 15, 2011. Older farmers' 28-percent share of all farms includes the 18 percent of farmers classified as older who operate retirement or residential/lifestyle farms. Since these farmers produce only 2 percent of U.S. output, their impact on U.S. agriculture as they leave farming entirely should be minimal. Their 14-percent share of assets does not contribute substantially to their own production, although they may rent land to other operators. About 22 percent of the land they own is rented out, and another 13 percent is enrolled in land retirement programs. Most production by older farmers occurs on large-scale (annual sales of $250,000 or more) farms and nonfamily farms. Older operators on these farms account for 12 percent of U.S. production but only 2 percent of farms and 6 percent of assets. However, some of these farms are multiple-generation operations, with at least 20 years' difference between the ages of the oldest and youngest operators. The large-scale and nonfamily farms with no apparent replacement operator account for 4 percent of all farm assets, which would have to be absorbed by other operations as the current operators exit. This chart appeared in the ERS report, Structure and Finances of U.S. Farms: Family Farm Report, 2010 Edition, EIB-66, July 2010.