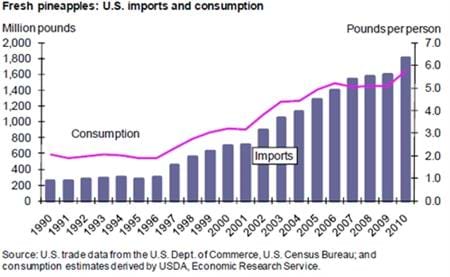 Demand for fresh pineapples in the United States continues on an upward trend, aided by the growth in immigrant population from Latin America and Southeast Asia where this fruit is traditionally eaten. The wide appeal of new sweet varieties, increased availability, consumer education on product handling and use, and the general focus on health and well-being increased demand among traditional American consumers as well. Domestic demand is heavily reliant on imports, which registered year-over-year volume increases since 1996. Fresh imports increased six folds in the last 15 years, reaching record volume of 1.8 billion pounds in 2010. Per capita domestic consumption of fresh pineapples has exceeded 5 pounds per person over the last 5 years, more than double the average during the 1990s. Should overall imports in 2011 continue to deviate from this 15-year trend, current domestic demand levels may not be sufficiently met, leading to a decline in domestic consumption from the estimated 2010 record of 5.74 pounds per person. This chart appeared in the ERS report, Fruit and Tree Nuts Outlook, FTS-347, May 2011.